Spirit Catholic Radio is a listener-supported 501(c)(3) Catholic radio station in Omaha, Nebraska. Our coverage includes most of the state of Nebraska as well as Western Iowa. To view our coverage map, click here.

How it Started
In the early to mid-1990s, several different groups of people began to think about and plan for Catholic radio in Omaha. A group of men and their wives who had attended a Christians Encounter Christ (CEC) weekend took the task to heart. After nearly five years of negotiations, prayer and the generosity of a few local Catholic families, Catholic Radio–KVSS–hit the airwaves. In 1999, VSS Catholic Communications, Inc. purchased a 500-watt signal from an existing local radio station and immediately began broadcasting a mix of contemporary Christian music and Catholic programming from the EWTN Radio Network on the 88.9-FM frequency. Additional programming followed from St. Joseph Communications, Catholic Answers, Ave Maria and Starboard Communications. After broadcasting for ten years on a small signal, VSS partnered with Kolbe Media, a group of people committed to Catholic radio in the Lincoln, Nebraska community and on Jan. 29, 2009, Spirit Catholic Radio purchased a new signal on 102.7-FM, and expanded to reach both the Omaha and Lincoln communities as well as over 1.2 million potential listeners throughout eastern Nebraska and western Iowa at 50,000 watts.    >> View our Engineering Page

Expanding East & West
The Holy Spirit wasn’t content with just this station and the translator stations in Norfolk and Schuyler, Neb. An opportunity arose in April 2009 to purchase a signal in Grand Island, Neb. Spirit 91.5-FM began broadcasting December 23 after an intense fundraising effort by the people in Grand Island with the help of many prayers. This signal was expanded to reach the Kearney and Hastings areas on July 19, 2011 after a fundraising effort in those communities and surrounding areas. Less than a week later (but more than five years in the making) Spirit 88.3-FM KOLB began broadcasting at 100,000 watts in Northeast Nebraska on July 23, 2011. A North Platte signal was added a month later. Additional signals were started in Chadron and Columbus. Fourteen affiliate low-power stations joined the network in 2005. The Scottsbluff station went on the air in 2020 on 99.3-FM after five years as a low-power signal. Now, over 92 percent of the state of Nebraska receives Catholic radio from this lay-driven apostolate.  >> View our Map

Funding
Spirit Catholic Radio is 100 percent supported by listeners and business owners like you! The board of directors is made up of sixteen non-paid individuals with a deep love of the faith. Spirit Catholic Radio depends upon the guidance of the Holy Spirit, God’s gift of grace and the generosity of the Catholic faithful throughout eastern Nebraska and western Iowa to bring this work to complete realization. Please pray for this lay apostolate, its board of directors and staff members and ask the Holy Spirit to inspire and guide your financial support of this missionary work of spreading the Gospel.

Join Our Prayer Apostolate | Ways to Give | Volunteer

VSS Catholic Communications, Inc. is dedicated to answering the call of the late Holy Father, St. John Paul II, for a New Evangelization. Our charism in the mission of evangelization is to broadly employ broadcast media to transmit the Gospel of Jesus Christ with the fullness of the living Tradition as preserved, revered and proclaimed by the Catholic Church for 2000 years. Everyone involved recognizes this apostolate as an extraordinary gift, which we receive anew each day.

The future is bright for Spirit Catholic Radio as God’s gifts continue to be showered upon the station! Chief among His gifts are you and your families. With your prayers and generous support, a market-competitive facility has been built and solid programming that helps to transmit our faith is in place. With your continued support, we can expand our local programming and broadcast reach and continue to bring you the truths and traditions of the Catholic faith. Please browse the rest of the Spirit Catholic Radio website and learn about the staff, the programming and different ways that your prayers and financial support can help. May God bless you! 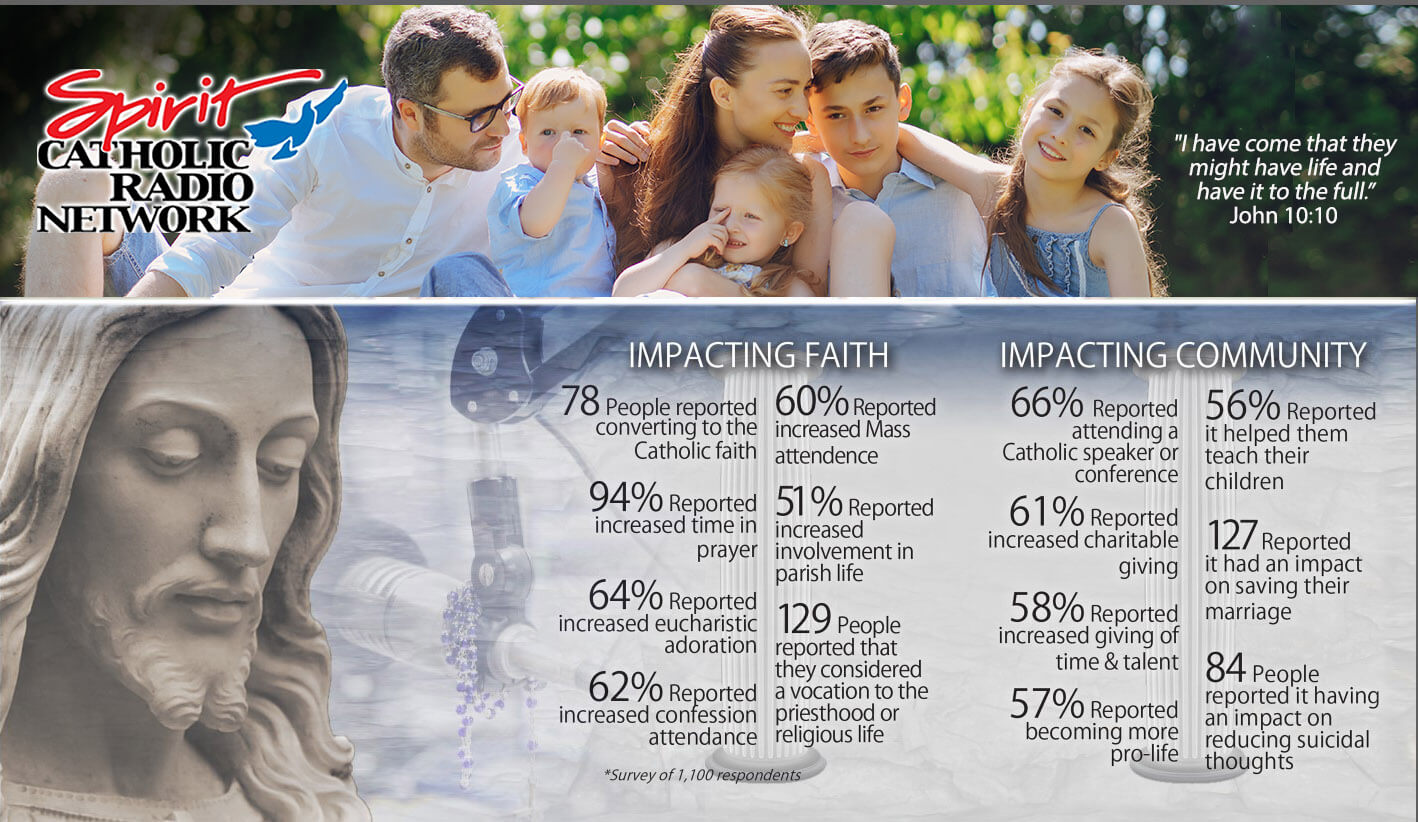 Our mission is simple. We want all people to encounter Jesus by transmitting the Gospel message over the radio airwaves.

A Message From Our Bishops

We are blessed to have the moral support of our local bishops around the area, and we do our best to support them!  Spirit Catholic Radio does not receive any diocesan funding, but our bishops realize what a vital apostolate it is to help our community grow in faith, stay informed and to reach out to those who have fallen away or never had an authentic encounter with Christ Jesus.

Hear interviews with our bishops regularly on our locally produced morning show, Spirit Mornings, Monday through Friday from 6:45 to 9 a.m. with interview downloads available!